Things to do in self-isolation (1)

I had been thinking of preparing a sort of photo montage of all the bewildered motorbike delivery riders from our security cams, but like the mass ejaculation of a coral reef, this eye-catching phenomenon has proved rather short lived.

So now I am 'reduced' to people in masks, people not in masks, plus the occasional curfew breaker.

We had one pretty spectacular example of the latter yesterday...

A bloke on a bike in an advanced state of inebriation trying to make it somewhere/anywhere before 4pm. He zig-zagged alarmingly across the cobbled street on our flank before hitting the curb at a 90 degree angle and dismounting involuntarily. (This one may have to be a video...)

He waited a bit and then attempted to continue, but his front wheel was now somewhat lacking in roundness and off he went again, this time sideways into some tall bamboo, disappearing completely for several minutes.

A car stopped and a man emerged. A knight errant? No, someone after an amusing pic.

Shortly afterwards another (maskless) woman appeared and led the stricken cyclist off south by the arm, seemingly just in the nick of time.

But later, after dark, he repeatedly re-appeared, alone in the village but for the hungry street-dogs, still visibly wobbly and now sans vélo, probing a variety of different exit options, at some risk of spending the night in police custody. 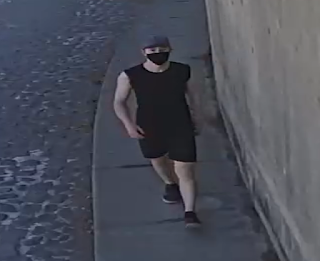 "As long as the dark side flows through the cracks of my flesh, I cannot be killed.” 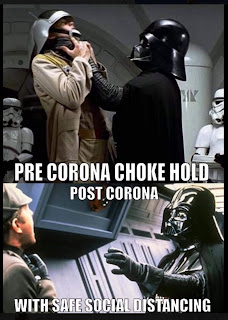 Posted by Inner Diablog at 4:25 pm