Watch out for the white pyjamas...


Those of us that speak Spanish should take the time to view last night's press conference from CDMX, from start to finish. It's an education.

Though I suspect that many local viewers had disappeared off to buy toilet rolls after the first five minutes or so.

I've seen more covered faces when they present a recently-captured narco. The audience at least appear to have grasped the basics of social distancing. It's an extraordinary show. Scientifically, medically precise, yet politically woolly in the extreme.

Unlike Trump, these guys are being pretty transparent about the difference between SARS-CoV-2 infection and Covid-19 disease.

Dr Hugo López Gatell, designated smartest guy in the room, possibly also in all of Mexico at this time, generally spoke sin pelos en la lengua, as they say, except when the subject of the President or the measures taken up to yesterday were discussed.

There was some over-elaborate hand-washing (and not the sort we have all been asked to practice) citing compliance with WHO guidelines and some unconvincingly definitive conclusions on the contagiousness of those that have the virus, but not the sickness.

He also had an awkward @anncoulter moment when he was speaking in front of an infographic that was saying something completely different to what was coming out of his mouth.

How convenient that the pre-symptomatic aren't spreaders. Lucky old AMLO. They must never sneeze, cough, rub their faces, bite their nails. That's what I'd call a viral load of old cobblers.

The lady in the box doing the signing was severing her own jugular symbolically a worrying number of times.

And that Canciller chappie on the right should be placed in immediate quarantine for the benefit of clear and truthful communications. At one point even Hugo there was giving him the stink eye. 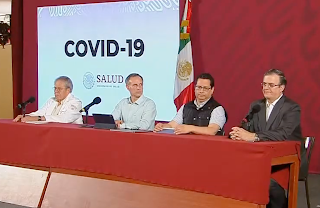 What about the borders? And what a load of piffle about the airports remaining open so stranded Mexicans could be repatriated.

He then started making some not very apropos remarks about working with the UN to prevent an international medical conflict — in effect a drug war, though not of the kind the country has been embroiled in for the past decade.

Overall a bizarre blend of the clear-cut and granular with the utterly vague. Everyone except those with a vital role in the 'sustento nacional' (national wellbeing) is to stay at home (x3), yet the decision as to how important they are in this respect is to be left to each and every individual.

I have to say that the spectacle of Mexico carrying on as normal had been equal parts disturbing and oddly reassuring. As with Boris’s brief flirtation with ‘herd immunity’, which he must now be regretting, it seemed to leave open the possibility of another way.

Like it or not, executive leadership is often defined by single key moments. I think we can now discount the possibility that AMLO will be outlived by a load of streets named in his honour. He has failed spectacularly, historically, and along the way possibly damaged the cause of progressive government in Mexico.