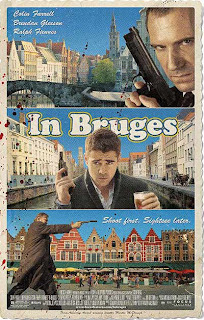 I had to see this movie; when it comes to Bruges I'm a total fanboy.

Whenever V and I go on one of our continental roadtrips, there's really no other decent place to have an overnight within an hour of the channel tunnel. If any readers from Dublin would like to experience a full-on 'shithole', try Calais!

Farrel and Gleeson play Ray and Ken, two hitmen sent by their paymaster to lie low and chill out in Bruges after Ray's first hit (on a priest) has had unexpectedly terrible consequences.

Irish dramatist Martin McDonagh writes and directs. His script has a life of its own, delivering entertainment and belly laughs where none would otherwise seem available. This works especially well in the 'gentler' first half, where Ken and Ray traipse around the sights, playing off each other like coarser, more lethal versions of Fathers Ted and Maguire. Farrel in particular adds pathos and depth even as he constantly scores cheap jokes at the expense of this lovely medieval town.

Later on however, when the action picks up pace, the persistent zip of the dialogue generates a degree of jarring awkwardness (Yuri isn't the best character in the movie!) and left me with the sense that some of the possibilities of character that McDonagh had opened up had ended up being overrun by the rush to a climax.

And as a Bruges-lover, I'd also add that the film focuses almost exclusively its oldy-worldy aspects which, as the screenplay notes, may not be your 'thing'. But in fact it has a smart and swanky shopping scene to rival our own Kings Road and the streets that spike away from Seven Dials in Covent Garden.

Those quibbles aside, this is superb. Best film of the year so far, by a long way.
Posted by Inner Diablog at 6:36 am