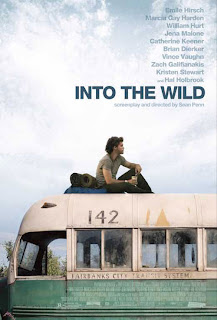 Prior to seeing this I guess I had been harbouring suspicions that any sort of Hollywood celebration of Christopher McCandless's vagabond ethos would feel bogus. But Sean Penn's treatment of the story is deeper and more poignant than I imagined it would be.

Following his graduation, McCandless donated the $24,000 left in his college fund to Oxfam and disappeared from the lives of his parents and sister. He adopted the name Alexander Supertramp as he wandered around America's west espousing a radical rejection of society that he had apparently derived from literary heroes such as Thoreau, Tolstoy and Jack London.

McCandless was fleeing an overtly disfunctional family unit, yet was himself the very model of social disfunctionality. The saddest part of the trajectory that leads him to entrapment within the Alaskan landscape is his final realisation that his philosophy of detachment has ushered in the loneliest of deaths.

He seems capable of intimacy only in short bursts, but the various people with whom he comes into close contact along the way all seem to benefit from the light he brings into their lives (McCandless appears to foster the very emotions he himself appears most incapable of) only to end up desolated when he picks up his backpack and moves onward and northward.

Penn hasn't set up 'Alex' as an example to follow, but McCandless's uncompromising flight from civilisation is one of those extreme cases that will stir up the latent 'supertramp' in anyone who perhaps once flirted intellectually with this lifestyle somewhere in between university and 'real life', or who have nurtured nostalgic longings for totalist escape in the years since.
Posted by Inner Diablog at 10:46 am