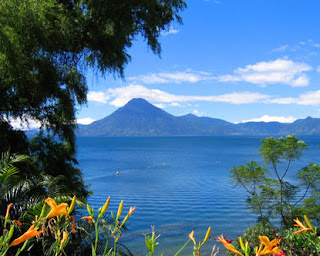 In spite of a viral email campaign and newsreaders advising their co-nationals to create lots of different emails in order to register their vote, Guatemala's flag came only an 'honourable' sixth in the competition to pick the world's most beautiful flag.

The disappointment was compounded by the fact that the winner was Mexico! (Especially after Chichén Itzá eclipsed Tikal last year in the 7 Wonders vote.)

The new challenge that the local media has taken up with gusto this week is to get Lago Atitlán (pictured) elected as one of the 7 Natural Wonders of the World.

Guatemala's flag recently turned up in a most unusual spot - the North Pole - thanks to intrepid local reporter Vida Amor de Paz, who had her journey filmed as a documentary entitled De los Mayas al Polo Norte. She notes proudly that the Mexican flag isn't to be found there, in fact no other Latin American bandera flutters above that most desolate locale.

You have about eight years left to go and see the world's sixth most beautiful flag as planted by polar bear-hugging Vida, because the pole will have melted away by the end of that period, she gloomily asserts.

Amor de Paz says she wanted to visit one of the world's most inhospitable places. (Surely there's a few of those in Guatemala City?)

Posted by Inner Diablog at 4:37 pm