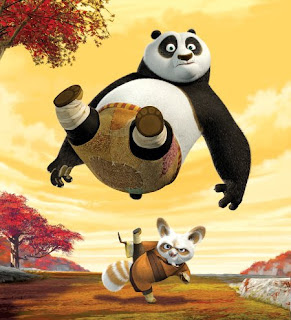 This week we watched Kung Fu Panda, an enjoyable animated feature from Dreamworks, which kept me entertained enough throughout its running time that it was only later on that I became aware of the creeping disappointment of the workaday script and lack of character development! They may of course be saving all that for the sequel...

Being a World Heritage Site La Antigua Guatemala naturally lacks anything quite so vulgar as a multiplex cinema! In days gone by it had two single-screen venues, one of which - the Contreras - has recently been re-born as CineLounge, a very comfortable auditorium where patrons can sip cocktails whilst taking in a mix of independent and big studio movies. Current attractions include The Walker and Rambo. (The former I have seen and enjoyed and the latter I have no intention of seeing.)

For the full popcorn and super-size soda experience one has to travel to the capital or to the slightly more accessible provincial towns of Chimaltenango or Excuintla, both of which now boast a Circuito Alba cine-complex. (The IMAX is in Guate.)

As far as I have been able to tell the big Hollywood blockbusters are released here a couple of weeks earlier than back in the UK. There are of course no shortage of pirated DVD editions of current cinema releases available in the market which retail for around Q15 ($2).
Posted by Inner Diablog at 9:46 pm