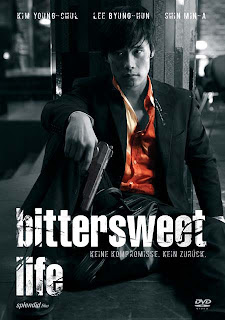 Director Ji-woon Kim had previously shot one of my favourite Korean movies A Tale of Two Sisters.

Here he brings his arty sensibilities to the Asian organised crime revenge thriller, with imperfect but nevertheless enjoyable results. Shallow (and even pretentious) on the surface the movie finds depth in hidden places: in its homages to the likes of Leone and Woo and in its stylistic and symbolic panache.

Sun-woo is the favoured 'son' of one of Seoul's gangland bosses. When the capo takes a three day break in Shanghai he asks his no1 enforcer to keep an eye on his young, beautiful (and crucially cello-playing) girlfriend. If she is unfaithful, deal with it, he adds. The mistake of compassion, if not indeed passion itself, is what sets Sun-woo's career on its southward bound trajectory.
Posted by Inner Diablog at 10:00 pm