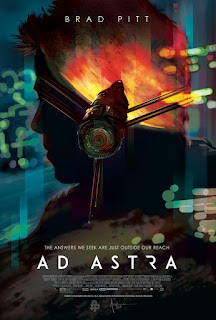 I first saw 2001 A Space Odyssey with my father at the ABC Shaftesbury Avenue a decade after it was first released. My 11-year-old mind was intermittently perplexed, but I don't recall thinking ‘How completely silly is this?' every five minutes or so.

Nor indeed 'What this really needs is a bit of Mad Max with lunar rovers’ or ‘I wish those apes would stop throwing bones around and start devouring astronauts'.
Kubrick's film is one of those ‘philosophical' sci-fi yarns that retains the power to thrill and existentially disturb up to and beyond the 'near future’ it projects into. Here in Ad Astra Brad Pitt clearly thinks he's in another such landmark and his ponderous voiceovers gradually start to deliver an element of unintended comedy, as if from within a rather poor Terence Malick parody.

Director James Gray must also want it to be that movie, yet he’s also desirous of delivering episodic reminders of others, such as Alien, or Total Recall, so the overall effect is Profound Sci-Fi Lite.

Yet it definitely looks and sounds like the premium product, as he has taken on Interstellar’s cinematographer Hoyte van Hoyterna and had an ominous score done by Max Richter. (Though there were seemingly no actual scientific experts involved, as they may all have been off somewhere complaining about Brexit or the weather.)

Meanwhile, the obvious literary reference is to Conrad's Heart of Darkness, yet again in severely diluted form, as the horror, the horror ultimately turns out to be a possible misreading of our cosmic predicament, an error of perspective, of the kind fathers are occasionally wont to have.

Posted by Inner Diablog at 6:11 pm