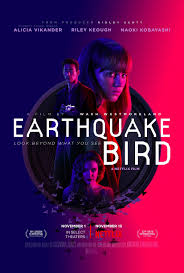 This would have been little more than a run-of-the-mill, slightly disappointing, mystery-thriller, but for two factors - the albeit under-used (and perhaps even a bit misappropriated) backdrop of late 80s Japan and another utterly compelling performance by Alicia Vikander.

She, along with Riley Keough is a little let down by the screenplay (though not as badly as a pair of Tokyo detectives), yet it is what they both do with the gaps between words that is so impressive.

As Teiji, Naoki Kobayashi is taciturn, yet still gets some of the movie's better lines. 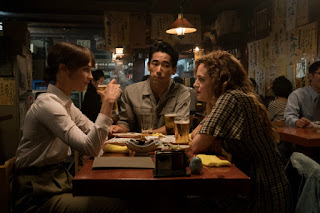 The novel was 'critically acclaimed' and I find myself now rather drawn to it. Ridley Scott has some form with picking up top notch genre fiction for his production company and then handing the texts over to directors who squander the opportunity to some extent. (Viz Child 44.)

The titular birdy is a narrative irrelevance in this adaptation.