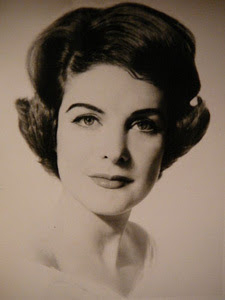 Today was my mother's 76th birthday. While I waited for her to get ready to go out for dinner I browsed a copy of the Evening Standard from August 18, 1955. It was in remarkably good condition. She kept it because it has a prominent piece about her winning a big public fashion competition in Eastbourne the day before. It also had a poignant piece about the precocious academic achievements of the 13 year-old Sheridan Morley who died last month.

"Don't be too glamorous," a boyfriend had once advised her on the phone before picking her up. The memory makes her chuckle now.

I'd just finished watching the last episode of Cambridge Spies this afternoon before setting off. When the subject came up over dinner she told me that she used to know Kim Philby 's wife. In the mini-series Philby is played by Toby Stephens, apparently an acquaitance of mine back in the days when I was learning multiplication. I do remember a kiddy party held at his mother's home in Chelsea, because when my own mother picked me up she got lost and we ended up on the Robin Hood roundabout near Kingstgon. Maggie Smith lived just off the west end of King's Road and we lived at its inception next to St Peter's Church in Eaton Square. Both SW1. Getting home should have been a doddle.

One of the more interesting secondary figures in Cambridge Spies is James Jesus Angleton, now the subject of de Niro's The Good Shepherd. It is said that Graham Greene resigned from MI6 in order to avoid becoming embroiled in the unmasking of Philby, a personal friend of his.
Posted by Inner Diablog at 11:04 pm