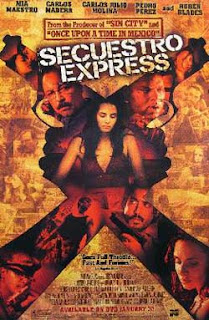 This is a situation that wants to be story but somehow doesn't quite make the transition.

'Express' kidnappings involve snatching rich kids as they fall out of the nightclubs of the Latin American metropolis (here Caracas) and holding them for several hours until their parents have coughed up a comparatively modest five figure ransom.

This phenomenon formed the basis for an idea for a short film that writer-director Jonathan Jakubowicz ended up stretching to feature length, without apparently expanding much upon important stuff like plot and character.

About of a third of the way through, the City of God vibe that it kicks off with seems to be giving way to a bizarre farce, in which one of secuestrados is held up by a rival gunman when taking cash out at the ATM for his kidnappers. Soon after that the car that the kidnappers grabbed along with their victims is itself stolen. There's also a bizarre mid-section twist involving a vicious dope-dealing queen. But none of this really comes to anything, and Jakubowicz's stated intent of generating awareness of the maelstrom of crime and corruption resulting from the extremes of deprivation in Latin America is undermined by his choice of hip urban musicians to play the men on the side of poverty. There are too many camera tricks and not enough real grit. Always a pleasure to watch Mia Maestro though.
Posted by Inner Diablog at 9:17 pm