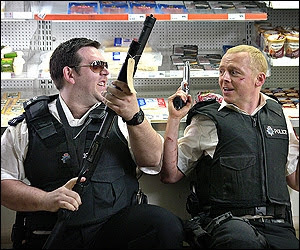 George laughed heartily when Billie Whitelaw, famed for her Sam Beckett roles, whips a sten gun out of her basket.

You certainly need to be playing with a full deck of cultural references to appreciate this movie. For instance, if I didn't know what it was like to shop at the Somerfield's in Pangbourne, I might not have found it quite such a hoot.

I disagree with those that moan that the final twenty minutes or so are overcooked. This seems to be very much part of the satirical point that Edgar Wright and Simon Pegg are trying to make. I especially liked the way that much of the 'comedy' here is played very straight, very subtle and very visual.

Generally a vast improvement on the usual Richard Curtis ouput from Working Title (even though I wasn't such a huge fan of Wright and Pegg's Shaun of the Dead.)
Posted by Inner Diablog at 11:37 pm