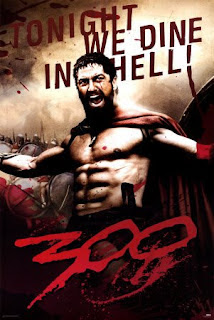 I recall having a bit of a gripe about the totalitarian undertones in the Chinese epic Hero. Here though, the implied politics never really get in the way of what is essentially a masterfully stylised piece of entertainment.

I guess it's a bit like Fox News and Al Jazeera, when the bias is bared fully, abs-n-all, it feels less threatening than the hidden messaging of channels that affect to objectivity.

The Spartans, who famously dominated the ancient political scene after their immortal encounter with the Persians at Thermopylae (yet apparently left little of substance behind for modern scholars and tourists to pour over), have ironically achieved a more covert but still durable legacy: as Western civilisation's inner Fascist.

And this is what makes their culture, such as we know of it, as abidingly fascinating as that of their perhaps equally-flawed long-term adversary, pluralistic Athens.

Still, there's something more Germanic than Hellenic about Zack Snyder's Spartan warriors, whilst back home their domestic political arrangements appear to be a lot more consultative than I'd gathered from my own classical education. Great fun though, and in places absolutely hilarious.

Time then for another viewing of this:

Update: One of the ironies of this movie, seen by some as a jingoistic prognostication on the confrontation between the West and Iran, is that the symbolic roles are easy to invert. Which ancient Greek state was more totalist and Taliban-like than Sparta? Which had a culture that was as obsessed with the good death as it was the good life? And doesn't the Persia of Xerxes look rather like a decadent bully of a superpower trying − and failing − to have its way through sheer military might? (In 300 the Spartans are also depicted as particularly camp homophobes, − also very Talibanesque− but of course in reality pederasty was more or less compulsory in that part of the Peloponnese.)
Posted by Inner Diablog at 12:18 pm