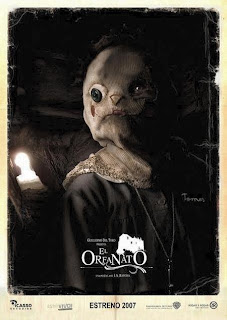 Here we go, I thought. Spooky old house, creaking doors, mongoloids in masks, heaps of melodrama and a bothersome derivativeness that had me mentally reviewing the signature techniques of several earlier scary movies (The Shining, Dark Water, Don't Look Now, The Others and everything the producer Guillermo del Toro has done whilst sitting in the director's seat.)

And then after about 30 minutes I realised I was actually terrified. All of these things had cumulatively attacked my subconscious and it no longer mattered at all what I made of it all on an intellectual level. (And Cantabria is to Spain what Scotland is the UK in terms of innate creepiness. The place is full of semi-deserted villages around which you can occasionally detect the furtive movements of strange stunted old people with odd limps.)

Del Toro's creative stamp is clear, because there is a careful interpenetration of the naturalistic and supernaturalistic storylines. I would say however that in this case it would be harder to rationalise away all the spooky-fantastical elements and although children are involved it is a grown up orphan this time who acts as the bridge between the two.

The film won seven Goyas including the awards for best screenplay (Sergio G. Sánchez) and best new director (Juan Antonio Bayona). Belén Rueda was sitting rather prominently in the theatre that night wearing her poshest frock and was taunted a little cruelly by the host after she was overlooked for the best actress Goya. Juan Antonio Bayona is definitely a director to watch out for.

I try to keep this blog spoiler-free, but if you have seen the film there's a great 'condensed review' here.

I'm with you on this film. It creeped me out. I'll be buying the CD.

It seems to be the film can be read as completely non-supernatural...but I'd have to see it again to say for sure.