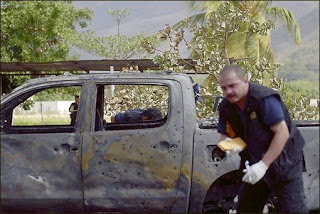 The identity of the Mexican drugs capo who died in the big inter-group shooting session earlier in the week would appear to be Juan ('Juancho') León, "alguien de peso", according to El Periódico .

He was in the habit of moving around with two vehicles and 24 bodyguards. But then it seems, he ran into the equally well-armed men of narcotraficante Joaquín ' el Chapo' Guzmán of the 'Blood Alliance'.

In all the investigating Cacos picked up 16 AR-15 and M-16 rifles (the sort used by the US Army), 14 pistols, several fragmentation grenades and around 500 bullets."Only a group devoted to drug traffic is able to buy those kinds of weapons and carry them with total impunity," notes PNC Deputy Director Henry López, in the Prensa Libre.

Arnoldo Waldemar León Lara, Juancho's step-brother has immediately stepped in to take over control of the briefly leaderless group of narcos.
Posted by Inner Diablog at 11:20 am