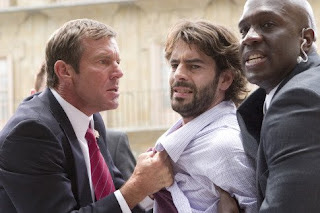 A number of recent releases have been rather odd hybrids between clever and dumb movies. I'm thinking of The Kingdom, Charlie Wilson's War and now this.

If Charlie Wilson's War was just dumb enough to pack the multiplexes, Vantage Point is just clever enough to the tweak the interest of people that know something of Rashômon and other more cerebral cinematic fare.

There was a very distinct sigh from a few rows behind us when the action rewound to the beginning of the 11 minute period in question for the fourth time, but Surfer and I agreed later that this rather willful structural eccentricity had ultimately failed to forestall the overall levels of tension and excitement, which were higher than either of us had expected. And Dennis Quaid and Forrest Whitaker certainly add a note of quality which would otherwise be absent.

Surfer wasn't too pleased however with the manner in which the baddies were finally thwarted, which I have seen elsewhere described as the moment the film went from Groundhog Day to Scooby Doo ("If it wasn't for those pesky kids...").

He did however note that it was a good thing that the plot never became "too convoluted" yet on reflection I'm wondering whether it was actually convoluted enough. You definitely have the sensation of being spun around an empty core in the manner of the most recent Jason Bourne outing, but here the problem is that you never quite understand what is at stake beyond the danger to the person of a ficitional US President. (Though the fact that the relationships between the 'terror suspects' are only partially revealed through the various vantage points is one way in which the movie did manage to leave me thinking.)

The car chase is definitely edited in the post-Bourne manner, but perhaps this is less a homage to the shaky camera hand of Paul Greengrass than an attempt to disguise the fact that apart from the Plaza Mayor itself, all the exterior urban scenes were shot in Mexico and not in the quiet university town of Salamanca. Spain is portrayed here as the antechamber to a seethingly Islamic North Africa.

Good to see Eduardo Noriega in a mainstream Hollywood flick. The role of his character is however one of the key unresolved mysteries.
Posted by Inner Diablog at 12:10 pm

How strange...they were showing TV spots for this right after we returned from Mexico at the end of last year and I clearly recognized the Zocalo (DF). But it's meant to be Spain?