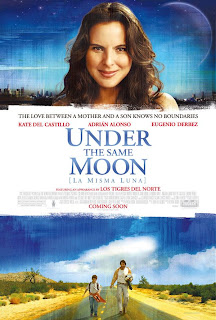 Being such a Derbez fanboy, I had to see this, though I ended up with mixed feelings about his performance in a straight role. Perhaps I was expecting him to say 'preguuuuntale' at any moment!
Writers on both sides of the border seem unable to tackle a tale of wetback hardship without over-sentimentalising their characters. The makers of this film didn't even try to avoid this pitfall and the result is mostly hackneyed, though there are one or two surprisingly affective moments.
It is essentially an odyssey - that of young Carlitos who makes his way northwards in undocumented fashion in order to reunite himself with his mother Rosario, who has been working illegally in LA for four years. It is the death of his abuela that prompts this journey, with the moment of opportunity arriving in the form of America Ferrera and her brother, two ingles-only chicano students who are offering to carry young children into the US by hiding them underneath the back-seat of their van.
From then on the moments of crisis mount up for little Carlos, but it helps that he - unlike his mother - can handle himself in near perfect English and is not at all prone to culture shock! Derbez's character Enrique is at his side, reluctantly at first, during the mid-portion of the narrative and I would much have prefered that his fate should have been left more open-ended than it was, as I think it would have been more intellectually satisfying to imagine Enrique wandering on, indocumentado, somewhere in the north of America.

Posted by Inner Diablog at 8:00 pm