The Mummy 3: Tomb of the Dragon Emperor 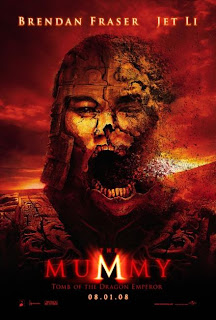 I'm not sure what it is - age probably - but I have trouble staying awake these days in films where the action is as relentless as this and the deeper stuff like complex character interaction is almost wholly absent. (V in turn hasn't made it past the half hour mark in any of the more recent Star Wars outings.)

Roger Ebert thinks this is the best of the Mummy movies, but whereas the first one, for all its silliness, is the kind of light action-entertainment I can happily watch again whenever it appears on the box, I had trouble even making it through a single sitting of this third installment from Rob Cohen.

It's a testament to the kind of movie this is that with such fine acting talent like Michelle Yeoh, Jet Li, Brendan Fraser and Maria Bello on screen, the most watchable characters are the Yeti. Apart from them, the prologue is another mini-gem like the one in the original film, and is probably already available to watch 'stand-alone' on the Web somewhere.

Talking of great movie prologues, this one is a class act, not like some of those scummy ones you find on YouTube.

Posted by Inner Diablog at 6:42 pm