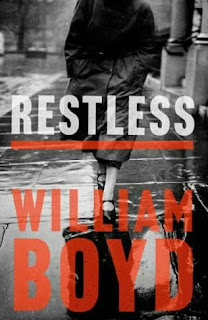 The plot for Boyd's Costa Award-winning novel has been spun out of the little-known history of British manipulation of American public opinion before Pearl Harbour.

There were perhaps some 3000 British 'BSC' agents in the US at the time (amongst whose number was Roald Dahl it seems) focussing their activities on bringing this isolationist nation into the European war. HQ'd at the Rokerfeller Center, they took over radio stations and news wires and fed anti-German stories and miscellaneous misinformation into the American media. A BSC document unearthed in the 1990s explained why Britain believed that their allies-to-be were ripe for such covert persuasion:

"The simple truth is the United States is inhabited by people of many conflicting races, interests and creeds. These people, though fully conscious of their wealth and power in the aggregate, are still unsure of themselves individually, still basically on the defensive."

Boyd alternates between the third-person narrative of Eva Delectorskaya, a Russian émigrée recruited to a unit on the fringes of BSC in Paris before the war, and the first person narrative of her daughter Ruth, a junior academic and English-teacher living in Oxford in 1976.

As the novel progresses Ruth's story becomes something you have to get through to reach the next installment of Eva's. Neither strand contains particularly beautiful prose or well-developed characters, but the overall thrust of the story remains fully gripping until the rather lacklustre finale where they are combined and wound up.

I suppose I'd have to say I was ultimately somewhat disappointed with Restless. I'd read Brazzaville Beach and The Blue Afternoon when I was in my 20s and remembered having enjoyed both of these earlier novels. There's a good deal of interesting detail about the British spy networks of the day, but very little in terms of detailed exploration of the intentions and emotions of the 'crows' themselves. In a tale where betrayal plays such a significant role you just need to feel the action a bit more.

Anyway, William Boyd has himself written an article in the Guardian describing some of the fun and games perpetrated by our secret services across the pond:

"BSC invented a game called "Vik", described as "a fascinating new pastime for lovers of democracy". Printed booklets described up to 500 ways of harassing and annoying Nazi sympathisers. Players of Vik were encouraged to ring up their targets at all hours of the night and hang up. Dead rats could be put in water tanks, air could be let out of the subject's car tyres, anonymous deliveries could be made to his house and so on. In the summer of 1941, BSC sent a sham Hungarian astrologer to the US called Louis de Wohl. At a press conference De Wohl said he had been studying Hitler's astrological chart and could see nothing but disaster ahead for the German dictator. De Wohl became a minor celebrity and went on tour through the US, issuing similar dire prognostications about Hitler and his allies. De Wohl's wholly bogus predictions were widely published."

Posted by Inner Diablog at 5:35 pm