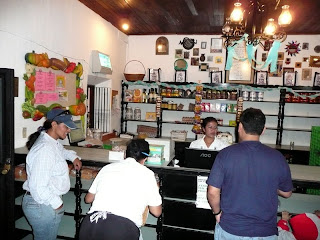 Today is Independence Day in Mexico and we were a bit surprised to see a Mexican TV news reporter awaiting the military parade in DF this morning wearing a flak jacket.

Last night in Morelia (Michoacán), at the very moment when the state Governor Leonel Godoy rang the bell and everyone filled their lungs ready to shout "Viva Mexico!" two grenades went off in the crowd, killing 7 and wounding over 80. As bodies fell and innocents writhed in agony, a firework display started and mariachis played.

Michoacán is not only the base of President Vicente Calderón, it is also the heart of what is now being desacribed as "disorganised crime" in Mexico - run by a new breed of narcos that care less about their social base (building schools etc.) and operate according to a far more random and brutal set of principles.

The crowd here in Antigua last night was less deadly but also significantly disorganised. Part of the problem was that the 15th fell on a Monday this year, creating a long weekend and encouraging an influx of outsiders. The fragile state of the Palace of the Captains General also meant that the marching bands were not permitted to fully circulate the park. The combined effect of more people and less space was therefore "una molotera," according to one woman we overheard fleeing up the 4a Calle Oriente. She was soon followed by one of the school bands, which broke away from the procession after their jefe called out "let's go, we aint never gonna to make it to the cathedral".

And up that road we soon drifted ourselves...and I was to make the interesting discovery that the sliced wholemeal bread made at Doña Luisa Xicotencatl is not only yummier than the Bimbo crap sold at the Bodegona, it's cheaper too. (However, one of the viejas who serves in the shop has been there about twenty years and makes your typical Parisian shopkeeper seem postively welcoming in comparison.)

UPDATE: This shockingly nihilistic intentado in the plaza of Morelia last night barely merited a mention on the BBC news, TV and Web. One has to suppose that editors over there couldn't find a way to relate it to the prevailing narrative of global terror.

"Lift your hand if you are one of the priority wounded," called out an ambulance worker at the scene...not a strategem that would work especially well even outside Central America.
Posted by Inner Diablog at 1:25 pm