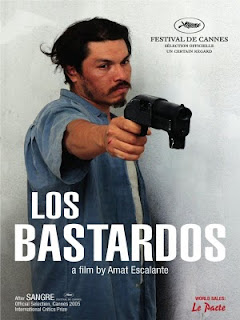 Amat Escalante's headline screening at the DLA festival was a painful experience in the manner of Batalla en el Cielo. (Indeed, Carlos Reygadas, the Mexican director whose quest it is to find a way of separating cinema from narrative, is listed as an 'associate' of this snorefest.)
From the poster here and the short-lived drama of the opening titles, one could be mistaken for anticipating something akin to an thrill-packed couple of hours.
But the sequence which kicks off the 'action' of the movie reveals its director's intention to structure his story around extended scenes where nothing much of dramatic consequence is permitted to occur, thereby draining all momentum from situations which do at least have the potential for tension. Escalante has also borrowed his mentor's signature technique of deploying the most inexpressive, almost somnolent amateur actors into this narrative desert.
The bastards in question are the propitiously-named Jesús and Fausto, a pair of indocumentados doing whatever job turns up in order to pay for fixing the failing sight of their auntie back in Guanajuato. (Or perhaps the bastards are the gringos who breeze in to pick the day labourers up off the side of the highway?)

Even when digging ditches during the day for $10 an hour, they carry a loaded shotgun with them in a black mochila, and come nightfall we find them tormenting a crack-smoking suburban mother in a sort of inert pastiche of Haneke's Funny Games. (1997/2007)...though it's not entirely without dread and discomfort and the prevailing tedium is memorably punctured by a jolting wake-up moment.
The immigrants' victim is convinced that her ex has hired the pair to do her in, but whenever she puts this to them, even proposing a gazumping maneuver, they appear distracted and deny her any confirmation. Their English isn't that good and anyway, in this particular school of Mexican film-making, all indications of motivation, psychological or otherwise, are usually suppressed.
So, whilst one must recognise the significant difference between a film which is boring by accident and one like this, which is boring on purpose, one can still hesitate to designate this as a worthy achievement.
Grade: C++

Posted by Inner Diablog at 3:40 pm