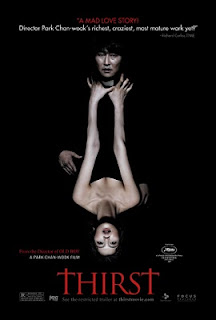 Winner of the Jury Prize at this years Cannes festival, Bakjwi (Thirst) by Park Chan-wook was also named as film of the year by Michael Fassbender on this week's Wittertainment.

It's about a South Korean Catholic priest called Sang-hyeon who volunteers for an experimental vaccine programme in Africa. This doesn't work out so well for him however, as he is given a blood transfusion which turns him into a vampire.

Back home his priestly nature is immediately tested by a whole new set of carnal desires. And while he is able to avoid killing people for a short period by making use of a conveniently comatose patient for his regular blood rations, he is drawn into a relationship with downtrodden wife and daughter Tae-ju, as a result of which his moral wellbeing is thereafter subject to incremental setbacks.

Soon the pair are plotting the demise via drowning of her dimwitted husband in a section of the story based on Zola's novel Thérèse Raquin (1867), of which Roger Ebert sagely observed in his review, that it contains neither priests nor vampires. (Though it does feature a regular game of dominoes, here represented by mahjong.)

The film has its flaws and occasional longeurs, oddly enough the most excruciating of which is a sex scene, but there's never any realy doubt that you are in the hands of a master.