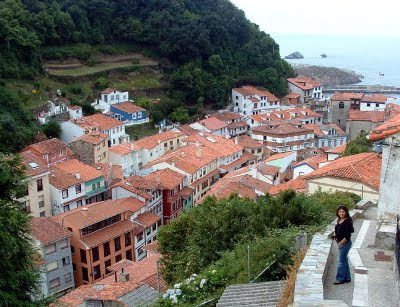 V standing above the little Asturian fishing village of Cudillero, whose residents speak the unique Spanish dialect of Pixueto. Every 28th of June a long poem written in this tongue outlining the events of the previous year is recited to a figure of St Peter as part of the village's fiestas patronales.

The northern route of the Camino de Santiago passes through here so there's a pilgrim hostal down below in the main town, where big battleship-grey seagulls swoop out of the sky like Stukas and visitors fleeing them are likely to slip in the many puddles of cider left by the locals' highly visual but somewhat wasteful serving technique.

Legend has it that the Vikings first discovered and settled this cove on the northern coast of the peninsula.