"With stench and smoak" 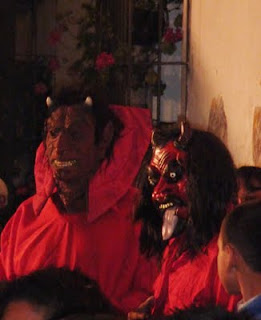 That's not us by the way, in spite of any superficial resemblance. The one on the right had his own personal diabolical aura of stale sweat and alcohol.

Guatemala's new found interest in public safety means that the publicly-funded (red?) devil is no longer incinerated at the mid-point between the two petrol stations in the Barrio de la Concepción...or indeed on the cobbles directly above the Esso fuel storage tanks.

Last night's events were supposedly more environmenally friendly as well, because Lucifer himself had been put together using recycled papier maché and the Muni has anyway been discouraging citizens from burning their own somewhat toxic household diablos in the street every seventh of December.

This didn't stop the acts which followed la quema from letting off a load of dry ice (i.e. carbon dioxide). A pair of Gallo culitos frolicked a bit, then on came a passable bunch of young Guatemalan rockeros. (Deslumbre?) Barroco however, were a bit barrubish.

For us Brits the resemblence to Guy Fawkes night on November 5th is cheering.

After picking up our dinner we ran into this little procession on 7a Avenida Norte:

Posted by Inner Diablog at 8:11 pm