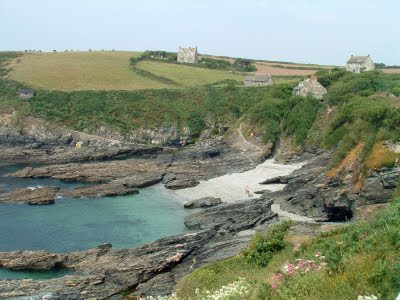 Prussia Cove, Porth-en-Alls, Cornwall
Taken 15th July 2003
Four years earlier Surfer and I watched the total eclipse of the sun from the top of the hill at the back.

A month or so ago I was reading Iain Banks's Transition and came across the passage where a lecturer insists that alien tourists would come to our Earth not to see the Grand Canyon or the Great Wall, but to witness an eclipse...which may well be a near unique phenomena amongst inhabited worlds.

So all you have to do to spot an ET, he insisted, is look out for the weirdoes amongst the masses gathered in anticipation of totality. Easier said then done however, because on that day in 1999 Surfer and I appeared to be in a very small minority of 'ordinary-looking' folk on that Cornish hillside!

Posted by Inner Diablog at 5:54 pm