These are a couple of hours of my life I am never getting back. 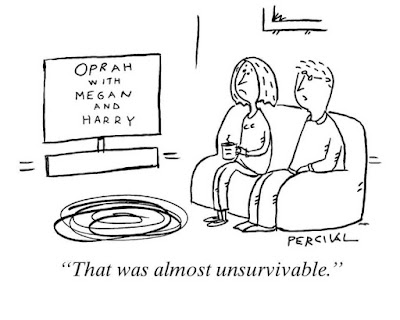 And then later on Harry was taken out of his sound-proofed room and made to repeat the offending observation and sounded even more condescending and racist when he said it (because he's royal and white, I suppose) and even less aware of just how awful it sounded, to me at least.

Other take-outs included the fact that nobody mentioned the British people — those folk that generally welcomed Meghan into their culture for a few years and paid for a lot of the stuff, like security.

Harry came across as perhaps the more credible witness, indeed a good deal more sympathetic than I had anticipated before I somewhat reluctantly sat down to watch this. Yet behind the pain, there is self-delusion. I used to be trapped, but didn't realise, he says. And he still is, and doesn't.

For I can see that Meghan is now free, happy and rich and find myself not really caring all that much, though I get why she felt she wanted...needed to do this interview. But Harry should have stayed in that sound-proofed room.

I've often wondered if Meghan would have had an even worse time with the tabloids in Britain if, instead of a having an African American mother (which kind of forced the likes of the Daily Mail to dog whistle their rabid prejudices) she had had a mother from a whiter and trashier demographic.

The overt disdain often directed at Kate Middleton's mummy is fading from memory. Imagine if she had been American.

We Brits don't often do racism all that well, but snobbery... 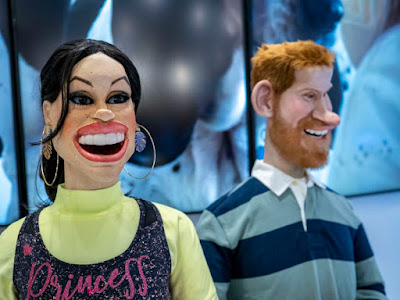 (Amongst the new bunch, second only to Jürgen Klopp for satirical authenticity?)

Posted by Inner Diablog at 5:45 am