On a visit around a decade and a half ago I read — devoured — Cormac McCarthy's No Country For Old Men in Tulum, perhaps not the represetative holiday read in a location that, back then at least, seemed a lot like a vision of paradise, 24-7.

One could walk up and down the near deserted beach, the only flagrant sound that of the waves breaking noisily around 20m from the shoreline, and imagine oneself in the shoes (sandals probably) of shipwrecked conquistador Gonzalo Guerrero, who splashed ashore near here in 1511. He must have had time to marvel a bit before the Maya came and knabbed him.

I remember when I first rocked up myself, aged twenty, I'd never experienced seawater as scrumptiously warm as this. A near perfect stretch of white-sanded, palm-lined beach. Pristine. There was something a little uncanny about it.

People will say it must have been paradise back in '88 when there was not a single hotel worthy of the name anywhere near the ruins, just a spot where one could 'sling up' a hammock. Well no, not really. There needs to be some basic cabaña-style accommodation available before the P word can be unabashedly deployed.

I once spent the night on a deserted desert caye in Belize, slinging up my hammock rather archetypally between a pair of palms just the right distance apart, and soon the mosquitos and sand-flies were vying with each other to chip away at my underside. Rather like The Good Place, it turned out not to be. 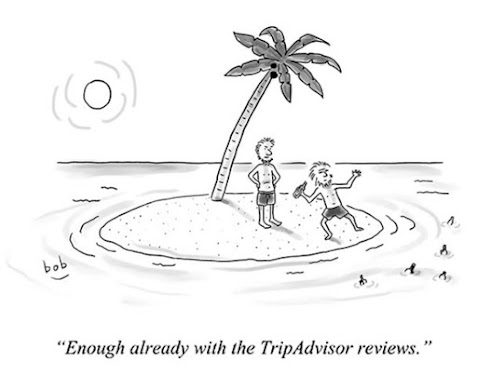 Guerrero emerged from servitude amongst the Maya to become a respected tribal warrior. To describe what it means to go native in modern day Tulum would inevitably involve saying a lot of disparaging things about certain members of the Millennial generation.

Let's just say that most of the wayfarers one spots around these parts nowadays look like they take a mean Instagram selfie. And ooooh, so pleased with themselves.

There appears to be an odd Dorian Grayish effect transpiring here. As the hedonists convening in Tulum get ever more beautiful, the location itself is finding it that much harder to shroud its crescive corruption.

Maybe No Country For Old Men would be a far more appropriate read in 2021.

Anyway, I certainly might have mistimed my arrival on the Mayan Riviera this year to coincide with Spring Break plus Easter. It has happened before and I have regretted it.

The seasonal aglomeraciones manifesting themselves around this time are extraordinary, and one still has to factor in the notable absence of certain European nationals yet to be let out of their cages.

There is an amount of French being spoken, and not the good sort, if you know what I mean. More Weh than Wee. Canucks possibly. Or maybe not...

There are also a rather worrying number of Brazilians na mistura. I guess the Mexicans, with their lax entry requirements, are the only ones that will have them just now.

It's not exactly a no questions asked immigration process, as I was asked quite a lot of questions, just not really the right ones, and ended up asking one of my own: Do you actually want to see my negative test from yesterday? 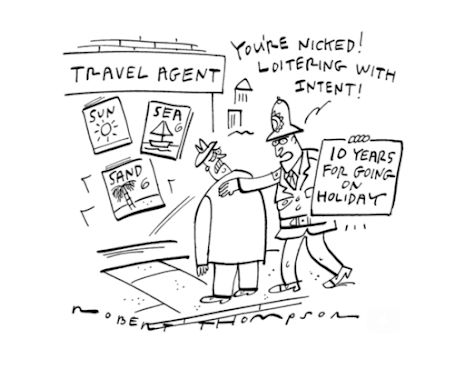 Some British academic clad in a hair shirt opined the other day that only his compatriots with valid (i.e non fun) reasons for going abroad should be permitted to do so...for most of the rest of 2021. These superior reasons — work, education — might actually have enhanced pestilence potential, but I guess it is a numbers game in the end.

The numbers on the playa in Tulum are being driven by the expansion of the town of that name which sits astride the 307 highway, several kilometres away.

The other afternoon I witnessed a traditional Mayan lesbian wedding on the beach conducted by a sacerdote who looked about as traditionally Mayan as Boris Johnson, plus a woman prancing around in a white cotton tunic whilst waving copious quantities of copal incense into the air — which still struggled to compete, aroma-wise, with all the wacky backy.

Most of the places to dine of a night appear now to be run either by fresas posing as hippies (yet that much more like trustafarians) or soi-disant named chefs, the sort of place where — if one asks for wine by the glass — one is served one's sauvignon plonk in a humungous copa into which the waiter ceremoniously deposits a volume of liquid he might have exceeded had he spat into it.

As a minor aside, within Greek restaurants on this coast there appears to be a standard requirement for female members of the team to cosplay as she who launched a shitload of ships, while Hey Amigo generic seems to be OK for all the blokes. At least until the floor show starts.

It's all a bit Naff — or Naffe — in a Buddha Bar kind of way. To be fair, Ilios Greek Estatorio is one of the more modish eateries I've had the chance to loiter in since Medellín, 2018. And unlike the Buddha Bar Paris, it doesn't come across as the sort of joint in which John Wick might suddenly show up and start shooting people. (That said, I have spotted a couple of novelties in Tulum: Mariachis and Russians. Russians FFS — what the actual feck is Cuba for?)

The waiters at Ilios start to go full on Zorba/Jewish wedding as the evening develops. Good on them. It's plate-smashingly fun like the Greek restaurants of my parents' generation. Who needs John Wick when the management invites patrons to trash the place?

Something else one never used to see in Tulum: mobile covid testing units, parked every few hundred yards along the road running behind the sand and looking very much like taco trucks. 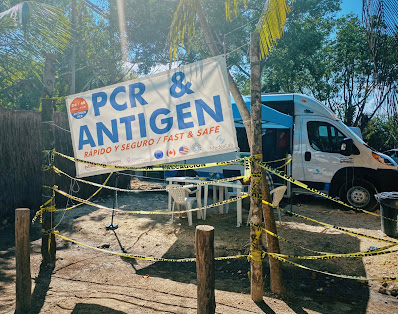 In Mexico I guess you have to say covid as if you are Hannibal Lecter, because that is how the government's man on the spot, Hugo López-Gatell, says it. Covidddthhhhth...

Posted by Inner Diablog at 8:04 pm

Guy, you need to check out Majahual down the coast from Tulum. You will be right back in 88.

Mahahual was going to be my destination this time, but I couldn't figure out how to get there without submitting myself to a longish bus ride, so in the end I gave up. Last time I was there is was ruined every other day by a cruise ship load of idiots. But in 2020, what cruise ships!?

There is a way to fly to Chetumal from Guate, but not without at least one night in CDMX and I didn't want to risk the capital either.

What I found with Mahahual was that five miles down the coast, it was a step back in time. The town was ok. We had a 4x4 rental so the coast road was very doable. We bused to Bacalar and rented a truck from a guy who had a bar/dancehall, did all the local ruins and drove out to the coast. I was very impressed with the Mahahual area. It is a pain to get to...

In non pandemic times it is ideal. Chetumal is easy, by bus or plane. The cruise ships are a pain, but as you say, the area is lovely and Bacalar itself is still relativeky unspoiled.