A team of salvagers encounter three eroded coins on a sunken galley that belonged to Sir Francis Drake (kind of a pirate and also not quite we're told, as if to humour both Spanish and British biases) which together somehow indicate the burial place of the privateer's treasure.

But then along come the Spanish customs authorities (AEAT) and the significant and signifying small change ends up inside an impossible vault within the Banco de España in Madrid. Cue heist shenanigans as the salvagers recruit an engineering boy wonder from Cambridge to solve their problem for them. 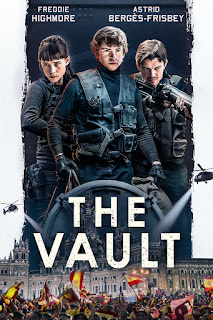 Jaume Balagueró's euro-caper has a very likeable cast and is generally terrific...but then I have to admit they had me at Madrid.

If I were to be given the choice of a flash weekend break in either Madrid or Barcelona, I'd always pick Madrid, and on some levels I suppose that makes me a bit weird. Spain's oddly riverless capital is one of my favourite cities in the world.

Here we get to see it at the culmination of the knock-out phase of the 2010 World Cup in South Africa, and so we kind of know where this is going in terms of last act crescendo. (And unlike the characters, most of us will probably also know that there was extra time in the final.)

It's a moment in time that many Europeans will have vivid memories of. Sadly, for me there are also heartbreaking associations as my best friend from Cambridge died in an accident during the group stages.

La Furia Roja's progress to the title that year felt inevitable, and yet in the end it came down to one decisive moment. This makes the backdrop seem a very suitable accompaniment to the developing action here.

Also featuring prominently is the Plaza de Cibeles outside the bank, a bronze replica of which sits in the middle of a traffic circle in the Roma Norte district of CDMX, directly below the apartment block where I usually stay when visiting the Mexican metropolis.

We've been watching too many B movies of late. This is a European film that felt like it belongs in the company of the big screen Hollywood A-list.

Posted by Inner Diablog at 3:37 am