There's a line, one that every decent man is surely aware of, that leads from ill-bred rudeness, through psychological abuse, physical harm and on to rape.

Yet referring to it as a line can be deceptive. Along its course there are some significant discontinuities — points where irrevocable, qualitative changes occur, leaps forward across sometimes vast, yet often barely visible rifts in the route.

The pilots that take airliners at gathering velocity down the runway on their way on down and then up, have names for a couple of these: V1, V2. Women also have a word for the gap between rough sex and rape: NO.

Perhaps the most insidious ploy available to a defence lawyer in criminal cases relating to gender violence, particularly when the defensora is herself female, is to downplay the significance of these discontinuities.

In Verónica Molina Lee's case there was a parallel line she had to traverse, from thoughts of self-imposed amnesia and reconciliation to putting herself through the travails of forensic and media examination. There is a huge and daunting chasm there for any woman to contemplate.

Followers of the twittering classes here in La Antigua will already know what has transpired. Diego Ariel Stella has a possibly temporary new home with bars in Chimaltenango. His accuser will now have her rightful opportunity to present her evidence in court.

My sincere wish is that this establishes a precedent, and that my own Verónica will now also be permitted the same opportunity, despite those preemptive moves to downgrade the charges faced by her male aggressor — beyond the influence and purview of his victim — which this high-profile case has shone a light on.

Meanwhile, if the parrillero is a profoundly misunderstood man, then I wish him good fortune. He will need it. He may struggle to get a fair trial now for he has conspired against himself to an astonishing degree, not least by picking a guilt-by-association defence lawyer and ending up in a situation where it has become unclear whether she is the bigger liability to him or vice versa.

He didn't pick his sister, but she plainly isn't supporting the appearance of polished respectability either. 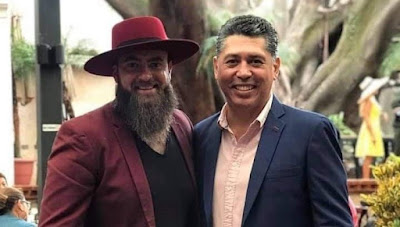 Guilt by association — how it works.

Using autocue, but without Oprah, he has belatedly essayed the 'my truth' testimony and then in the sala this morning finally appeared to show some remorse.

Too little, too late. The cabashero, frente en alto routine would have been more appropriate at the start of the process, not the middle, and he rather obviously originally went for the box of tricks instead before the Jugado de Primera Instancia Penal.

The boycott gathering around the restaurants he has fronted in a naff gaucho hat — NiFu Ni-Fa* — is an unfortunate sideshow. Claudia Paniagua's other toxic male client  — Jason Wade Lever — is also part-proprietor of hospitality businesses in town, yet I have never mentioned them by name, as I am aware that they have other, more involved socios and employees who have had no part in the relevant transgressions.

Lever and his lawyer appear to have no shared language, so one would have to ask why he would be prepared to tolerate this sort of inconvenience? What else has the "defensora de los..." been bringing to the party?

Today she appears to have recluded herself from the Diego Ariel Stella case. This really should mark the formal conclusion to her scumbag-defending days.

On one of several occasions that she has forced a delay in the juicio featuring Lever — one of Antigua's most prepotente masculine scumbags — she presented a sick note.

Yet an old school friend, himself a judge, came up to V and informed her that he had only just been in a courtroom that same morning with the Magistrada Suplente, in which she had been representing a drug dealer. 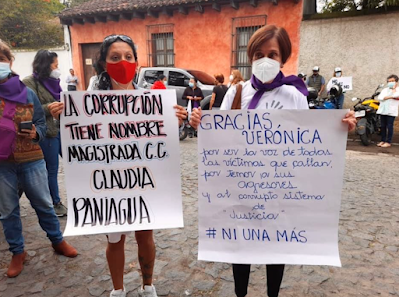 Today the Magistrada Suplente did not appear in court beside her client but instead seems to have sent a surrogate who duly attempted to precipitate a re-programming of the audiencia — precisely the same artimaña attempted last month on behalf of Jason Wade Lever. On both occasions the judges were wise to this ruse and did not permit it.

Guatemalans are rightly up in arms just now about corruption, but the traffic of influence is on many levels something more pernicious. There are functionaries here who would never take a brown envelope under the table who nevertheless permit themselves lapses in rectitude owing to pressure from the likes of Consuelo Porras and Claudia Paniagua. Enough!

* I generally won't hold it against a bar or an eatery that its owner is a bit of a turd, just like I won't (yet) deprive myself of movies with Johnny Depp in them. However, in this particular instance, we went once and never again, because the waiters had that most bothersome tendency to take up position just at the edge of one's peripheral vision and from said station, spent the entire meal making exasperatingly unsolicited interventions.

Posted by Inner Diablog at 7:30 pm