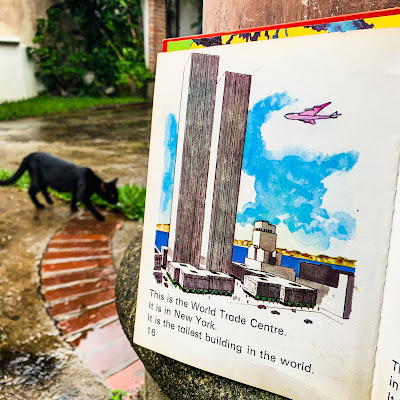 A day to reflect perhaps on the covert non-linearity of time. I doubt there is anyone who experienced 9-11 as an adult that has any real sense of temporal distance from that moment. Or rather collection of moments — each as vivid and significant as something that occurred only yesterday.

My first one is lightly blurred. I recall I found the news of a plane crash at the WTC — assumed to be a small plane — on the BBC News website and was soon after taking a call from a colleague working from home and simultaneously watching live who was cut short in mid-sentence when footage of the second plane's impact was shown. I then got in a lift and descended to the bar on the ground floor in search of plasma screens. There I found the Chairman sitting — alone — watching the towers burn, leaning back into the sofa with his arms outstretched either side of him.

Then, a frantic exchange of calls with my wife. The reaction of the woman sitting at the desk beside mine whose mother had called from a bus travelling along Broadway, having just witnessed the jumpers.

The next recollection is one of mental confusion. The need to attend a meeting about something which would have seemed trivial at the best of times and not really being able to comprehend how anyone was able to go through with it. Only a distraught American colleague seemed to get it.

During that meeting the towers came down. And then, a long-scheduled trip that same evening to the Globe Theatre to see some minor comedic nonsense by the Bard. It had been set up as a 'treat' for the PA department following an award. I left at the midway interval. I remember standing beside the Thames and observing with a chill as jet after jet passed in their descent over the City.

This image can be found on page sixteen of an oddly dystopian picture book called 'Starters Places: America' that I was given in 1972, mixed up with illustrations of tornadoes, dirty oil, hulking, gas-guzzling cars, slavery, sporting violence and junk food. (On the plus side, it asserts that the Pilgrim Fathers 'made friends with the Indians'.)

I saw the plane that crashed in Pennsylvania twice, coming and going over my place in Ohio. It seemed odd to be flying so low, I figured the military was training for an emergency airlift using civil aircraft. I could not have been more wrong.
My take then and now as well, is that it was little more than a sucker punch. A weak state punching a big state by a sly trick of hand and getting results that were but a slight turn of the big state's head. The sucker punch provided an excuse for America's military complex to flex a bit and get paid a great deal. As with any sucker punch on a much bigger and stronger person, the reaction has few rules. The fact that we gave the House of Saud a free pass over the whole things reflects the total lack of rules after a sneak punch. The US beat up the two clowns standing next to the state that threw the original punch.


The Saudi connection is the most irksome. As I mentioned once before we soon had a major corporate client from the Kingdom whose execs were openly making approving noises about 9-11 in meetings. Even more disturbing was the way that the exec on our side who organised an all hands two minutes silence on 9-12 was later ushering in an off the books, notorious Saudi financier client, whose 'charitable work' had a focus on Afghanistan.