Remembering how John McEnroe rather smugly informed his BBC co-presenters during Wimbledon this year how the USTA would be unlikely to offer Emma Raducanu a wildcard.

You know what I was thinking — you cannot be seeeeerious! 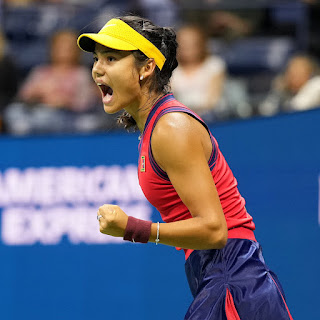 Writing on Coffee House before the US Open final today Damian Reilly suggests that "The very best, in tennis as in all sports, almost without exception, make it look beautiful – it’s why we can’t take our eyes off them (because beauty is an element-bending superpower)."

This is true to a point. This ability to make tennis look beautiful has often been missing in the 'very best' in recent times, most obviously in the form of the undoubtedly great Djokovic and Williams, no matter how many affirmations they seem to make on court and afterwards of supernatural support.

Going back just a bit we find also wonderful players like Navratilova and Sampras, whose ascendancy was grounded in the ruthless application of a single devastating technique, which was then most effective on grass.

Element-bending is not the same as power, endurance, relentlessness, mental toughness, shot variety, on court intelligence, serving aces at break point and so on, useful and amazing as these things all are. Or the gladiatorial qualities we admire in the likes of Connors and Nadal.

When Federer was in his prime, even when not winning, there was indeed a numinous quality to his play. Those moments that could bring an 'Oh I say...' out of Dan Maskell — and I reluctantly have to admit that there were occasions when John McEnroe himself was deserving of the exclamation. Yet, as with Andy Murray, these were flourishes only, somewhat smothered by a sulky on-court demeanour.

During Raducanu's semi against Sakkari the other night, the US commentators started to talk in hushed whispers, unconsciously responding to the aesthetic element of the 18-year-old's play. It's way too early to 'anoint', as another commentator said during the previous match, but the force does appear to be strong in this one...

Fernández too. On paper this was always going to be an exceptional conclusion to the women's event and it played out in brilliant fashion, potentially eclipsing Djokovic's scheduled coronation as the statistician's GOAT tomorrow.

This interview with Leylah's Ecuadorian father Jorge was very touching.

At a time when global citizenship might seem to be both outmoded and hazardous, these two young women could be significant role-models. 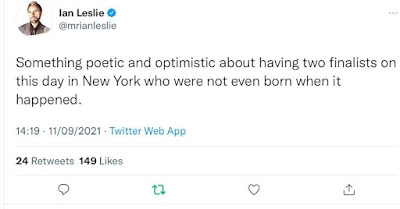