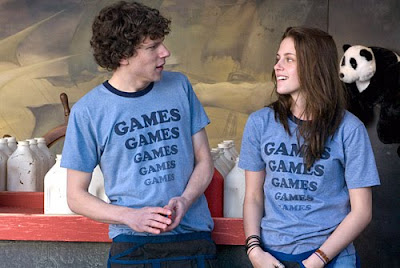 A recent graduate with one of those more impractical degrees discovers that, as a result of his father suddenly winning less bread, he's going to have to work at a shoddy amusement park all summer if he's ever going to be able to take up that grad school place in NYC.

Is it me or were there more of these angsty young-love movies around at the time that this one was set (late 80s, early 90s)?

Greg Mottola also directed the guilty pleasure that was Superbad (why haven't I reviewed this..?) , and as such belongs to the Apatow gang. This is a gentler, dare one say maturer, look back on American youth, where the puking is served up almost as an afterthought. (Though Superbad was poignant in an rather indirect way at times too!)

Dr Mark is dismissive of the revenge of the geek comedy genre. American teens just aren't like that, he opines. It's comedy for older dudes who have failed to grow up...and reconstruct.

Having spent some time in the area before I went to Cambridge, dating a high school girl from Long Island, I think I can say that the good doctor is only partly right. Whilst my girlfriend and her circle of chums were actually remarkably ripe of mind for their ages— if a little unsophisticated — I also had the chance to hang out with some college kids at UCONN near Hartford, and these were the definitely the kind of archetypes that a director like Mottola could work with — in either of his modes, foul-mouthed or reflective.

Anyway, Adventureland is about recent college evictees and set in a period just a couple of years before my own graduation. I'm a real sucker for this kind of movie and really warmed to this one. (V was a little less enamoured, perhaps because she knew Bill Hader was in it and was expecting a laugh-a-minute comedy!)

I haven't seen Jesse Eisenberg since the superb Roger Dodger and had been wondering what happened to him. Kristen Stewart was great too. I suppose I'm going to have to watch Twilight now.

Posted by Inner Diablog at 3:27 pm