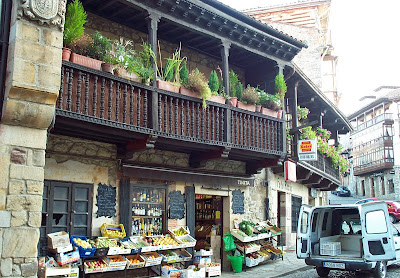 It may not be difficult to spot Moorish decorative flourishes in La Antigua but the basic model for domestic architecture in the colonies fell just outside the Caliphate: the mountainous north, especially Asturias, Cantabria and Navarra. This is after all a land of densely wooded contours, cooler and wetter than the plains to the south.

The Spanish empire may have radiated out from Seville, but Andalucia was deforested in order to produce the great fleets it depended on, and today the patios of the lower half of the peninsula tend to feature colonnades constructed from stone rather than wood.

This image comes from the picturesque Cantabrian seaside town of Comillas which we visited for the first time in 2002. The houses are made with locally quarried stone, but the incorporation of terraza española attests to a technique that was to be transplanted successfully to Central and South America.

Posted by Inner Diablog at 4:40 pm