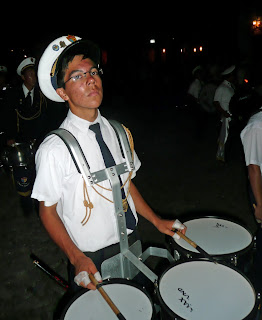 With our ears still ringing from the drums we bought pizza by the slice last night from Pedro's (next door to 'the restaurant with no name')...an experience which reminded me somewhat of late nights in London.

We'd just followed a break-away group from La Salle's old-boy band as they made their way back to the school via the Calle del Arco, having paused beneath the arch itself for a ten minute mini-recital.

This event seems to get bigger and louder every time. I don't recall so many bandas de ex-alumnos in years gone by.

Performance styles varied from the very martial Tridentinos (an institution that must surely provide the kind of education which Señor Arzú would approve of) to the haciendose un colocho (shape-chucking) technique of the musicians representing the Liceo Antigüeño...my sister-in-law's alma mater.

V once turned out as a batonista for the now defunct Colegio Mercantil.

The INSOL-ente girls undoubtedly possessed the most fetching flag carrier: more of a demure Señorita than a swotty Abanderada. In spite of having traipsed around the cobbles for hours in high heels she still managed a sweet smile as she passed: 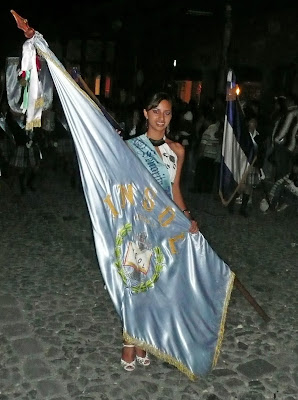 Posted by Inner Diablog at 4:09 pm