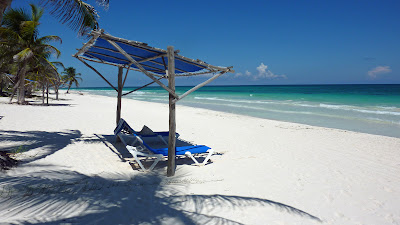 This afternoon a turtle swam right past me as I floated on the waves close to the shore.

I'd seen some signs back in Playa asking sunbathers not to allow the poor little things to get caught up under their sunbeds and I thought 'yeah right.....and they can become completely disorientated by all the chill-out music'.

But this is the real deal. The closest I've ever come to the perfect Yucatec shoreline, with blindingly white sand and blue-green opaline seas. And this is what it looked like at 2pm today.

That Wal-mart, Starbucks and 'wannsum blow?' seem like a million miles away now, though in fact they are just an hour up the coast.

I seem to have the place pretty much to myself. I got to know the owner and his wife when I was last here in 2006, but they are sojourning back home in France right now so it's just me and the on-site manager. (He more or less just handed me a flashlight after I signed the register and wished me luck.)

The driver who brought me here warned me that there's not much tourism at this time of year. I suppose in most years this is the period when the hurricane threat is at its greatest, but so far in 2009 all the big storms have been frothing up over in the Pacific.

The restaurant is closed tonight so my decision about whether to stay on an extra day will depend on finding somewhere to eat further up the beach. I'm around 15km from the town and have largely been subsisting on Snickers bars today. I feel like Hurley from Lost.

Talking of which, some of the other hotels along the stretch south of the ruins look suspciously like the kind of establishments where the staff will greet you with a cheery 'Namaste' at the slightest provocation.

Over the past few years Tulum seems to have gone out of its way to attract nobs (actually nobettes in the main) from the New York media and fashion industries.

I could be wrong, but on both occasions I've come here Las Ranitas appeared mercifully free of the Big Apple's self-pampering crowd. Perhaps American fashionistas are a little intimidated by les grenouilles?
Posted by Inner Diablog at 11:19 pm