Notes from abroad: Chiapas and Tabasco 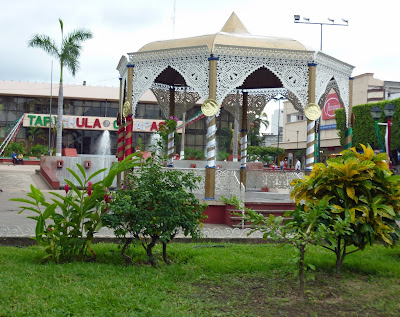 Southern Mexico still feels like a land under occupation.

It seemed that every time I managed to nod off the lights came on and some other official, usually armed, started patrolling the aisles looking for a random passenger to hassle.

I'm sure it's all in the interest of keeping Class A drugs and Class Z Central Americans out of the patria, but it can be a little intimidating, and for the seasoned traveller in these parts, a dispiriting reminder of the 80s. (A major flashback occurred when we stopped beside some heavily-camouflaged Mexican troops sitting behind a sandbag emplacement pointing a large, belt-fed machine gun at the coach.)

Back in Guatemala last time I had a flashlight shone in my face as someone shouted 'papeles papeles!' was way back in 2001.

Anyway, I'd thought this was my second journey along this road but then I recalled that somehow Surfer and I got back to Chetumal from Palenque in '88. Did we go all the way up to Campeche by bus before hitching that mad ride to the border, or did we knowledgeably hop off at the earlier crossroads? I can't remember...

In those days the military were everywhere. We'd exited Guatemala the (very) hard way, up to El Naranjo (Petén), and then via boat ride along the Rio San Pedro, which was a bit like the Apocalypse Now jungle-journey experience. Both the Mexican and Guatemalan armies were in gung-ho mode and indulged themselves by strewing the contents of our rucksacks on the ant-infested forest floor. Surfer had an alarm clock which one imaginative squadie took for the key element of a DIY bomb-making kit.

Anyway 'Checkpoint Carlitos' was one of the reasons I decided not to drive this time. That and the inherent difficulties of wet season roadtrips in this part of Mexico. Even the ADO GL coach took twelve hours to get from Tapachula (Chiapas) to Villahermosa (Tabasco).

Posted by Inner Diablog at 1:47 pm