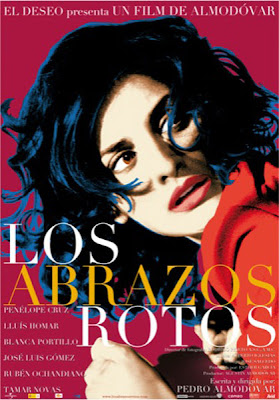 This week The Onion is running a spoof story to the effect that the next Quentin Tarantino movie will be "an homage to beloved Tarantino movies of the director's youth."

Well, by the look of things Pedro Almodóvar is already at it. For in Broken Embraces (Los Abrazos Rotos) he moves seamlessly from quoting random arthouse movies of the past to self-indulgently referencing his own stuff. (Indeed, the film within a film here is a pastiche of his own Women on the Verge of a Nervous Breakdown.)

This movie is frankly all over la tienda. Ostensibly the recollection of a blind former film director who has adopted his own pseudonym in order to shelve memories of a doomed affair with the kept woman of a dodgy plutocrat, the question of whether this is a story that needed to be told — an in particular whether it needed to told in such an intricate manner — is deferred only by the director's insistent imposition of his faux-melodramatic, haidresser-noir sensibility.

Still, that my attention span didn't go into cardiac arrest is testimony to the jaw-dropping watchability of Penélope Cruz and the landscapes of Lanzarote.