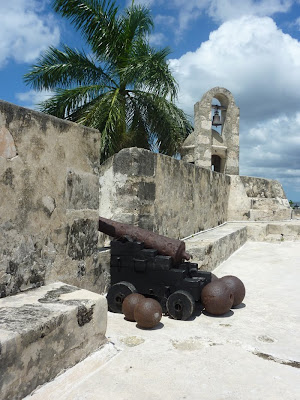 For much of its early history Campeche was constantly on the receiving end of a bit of aarrrrrgh.

Perhaps the aaaaargh-est of the lot was one Laurens Cornelis Boudewijn de Graaf, aka Lorencillo.

In 1685 Lorencillo and his sidekick Grammond turned up here in Campeche with a small fleet and 700 men and generally sacked the place.

Once it was clear that the Spanish government was being a bit codo by refusing to ransom the population, Lorencillo decided that a mass execution might get those pieces of eight flowing. However, he'd only managed to off two unfortunate townsmen before being persuaded of the essential 'uselessness' of his actions by a certain Don Felipe de la Barrera y Villegas.

Earlier, in 1661, Henry Morgan had captured several heavily-loaded Spanish galleons in the port here. 8 years later another sea-going opportunist called Roche Braziliano attempted to blockade the city but foundered and was captured...only to 'escape' after sending the Governor a threatening letter.

Posted by Inner Diablog at 2:16 pm