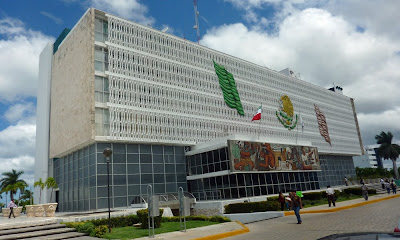 Around the time of independence the government of the Yucatán formally petitioned its equivalent in Washington DC to admit them to the Union. Unfortunately, the pinches gringos puñeteros told them to take a hike...and so the peninsula eventually ended up as part of the 31 United States of Mexico and not one of 51 further north.

Until the 1950s road communications between the Yucatán and the rest of Mexico were almost non-existent, and as noted just yesterday in this blog, they still leave algo to be desired. Once you get past Ciudad del Carmen however, one does have the pleasure of zipping along Highway 180 which follows the Gulf shoreline northwards just a few metres from the shorebreak and lines of expectant pelicans.

This city, formerly the Maya community of Can-Pech, was re-founded in 1540 as San Francisco de Campeche by those persevering visitors from Spain. It had been something of a second coming for the conquistadores, as their first expedition to this side of the peninsula — led by Francisco Hernández de Córdoba in 1517 — had been put thoroughly to the obsidian sword.

Nowadays local government is housed in this particularly dubious structure, the Palacio Legislativo, which is lit up every night with the colours of the Mexican flag...just in case you hadn't got the point already.
Posted by Inner Diablog at 2:14 pm