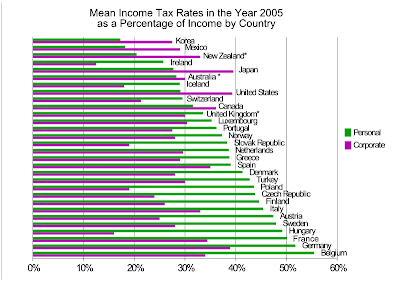 Don Marco made some observations in his reaction to a comment I made on his blog that I thought merited further investigation:

"Redistribution by confiscation is a drag on productivity, as can be seen by the retarded growth rates of those states in Europe whose marginal tax brackets are higher and whose central governments consume more than that of the US, a nation which has historically outperformed the EU in both growth and productivity."

Now let's look at the latest CIA Factbook data on GDP per capita. Most of the high-taxing European countries on the chart above do indeed perform less well than the USA in terms of per capita income. But there are exceptions, the most notable of which would be:

But then again, look at Ireland, which until the credit crunch was experiencing remarkable growth while at the same time taxing rather less than the US. It's per capita level of GDP reached a very commendable $46,200.

At $52,000 per capita Singapore is the highest performing English-speaking economy in the world which isn't totally dependent on the export of oil. (Brunei comes in at $53,100) It also has a top rate of individual tax of just 20%.

Meanwhile, Mexicans are in aggregate three times as wealthy as Guatemalans (GDP per capita of $5200), who are in turn almost twice as rich as Nicaraguans...but not quite as pistudos as the Salvadoraneans next door.

Interestingly Cubanos are also almost twice as well off collectively as chapines.

Argentina is currently tied with Mexico at $14,200...pretty poor considering this South American nation was cruising way ahead of both France and Germany at the start of the last century. And they're probably not even going to the World Cup next year!

Top spot in the Spanish-speaking world outside the Iberian peninsula goes to Equatorial Guinea, (at $31,400 also top chucho in Africa), but over on this side of the Atlantic the winner is Puerto Rico at $17,800, followed by Chile at $14,900.

Posted by Inner Diablog at 7:00 pm

Ah, Norway, that perfect cross-section of global demographics! If only we could all live like they do; Lutheran and free of all the dark skinned of the world!

I particularly enjoyed the reference to the Cuban standard of living...be sure to check the new issue of LaCuadra for a few of my comments on that Marxist Garden of Eden.