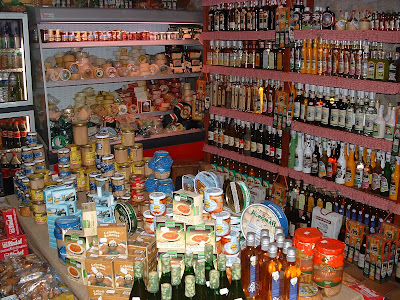 Asturias aka el pais de los quesos is a veritable treasure trove of edible productos artesanos. My mouth waters at the recollection of it.

Here in Antigua the cheese situation is generally less favourable. And I say this the morning after having grated the last little chunk of Parmesan I brought back with me in June....Parmesan from Reggio that is, as opposed to queso parmesano from Tegucigalpa.

Step upmarket (into say Epicure but porfa not Sabe Rico, regretably a bit of a bare-faced estafa) and you can find premium old world staples from Switzerland — decribed in The White Tiger as "a small , beautiful country in Europe full of white people and black money" — and Holland. But not a whiff of say Camembert or Manchego.

Locally-produced queso seco goes well sprinkled over frijoles and the queso de pueblo has a pleasingly creamy texture. The salty ricotta-like requesón, made from the first cut of the cheese, is also rather scrumptious.

For much of last year we were buying our queso de capas from don Andres, a charming itinerant who reaches our road from his home town of Patulul at around 11am every Friday. Unfortunately, once I'd whittled down the suspects in the case of our occasional bowl problems, don Andres's layer-set cheese looked in imminent need of legal counsel. We still buy his cream though.

Nothing produced here however is quite a match for the famous string cheese of Oaxaca — el quesillo — though one can make do with the ersatz versions flogged by the La Cuna del Queso (Taxisco).

Posted by Inner Diablog at 5:18 pm