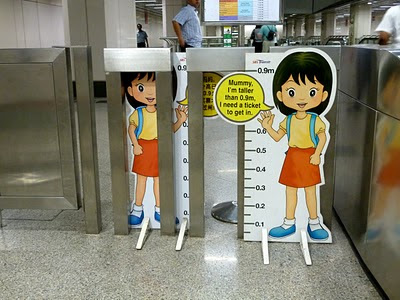 In Singapore (and Hong Kong too) height not age determines when children need to start paying their way on the subway system. My father has opined that this makes sense as tall kids take up more room.
It's a measure that one might diss not only as heightist, but also potentially sexist and racist once the statistical averages are applied. For in such ethnically-diverse societies there's surely an implied advantage to growing up in a community whose members are on average a little on the short side. And across the board, mothers might even be tempted not to feed their kids so well!
Other more formalised expressions of prejudice in Singapore include the promotion scale that Malays have to stand up against in the civil service and police force. Once they reach a certain level, further advancement is forbidden. The official rationale would seem to be that these people (the original inhabitants of the island) might not be trustworthy if trouble ever broke out with neighbouring Malaysia.
The Malaysians do have a very significant card up their own sleeve: they supply all the water in Singapore, which flows in via pipes strung beneath one of the two big causeways linking the countries, Joel informed me. Singapore does have better facilities for processing this water and so much of it ends up being flogged back to the Malaysians in purified form.
Speaking of children and mass transportation, when it comes to long haul flights, I am now firmly of the belief that children beneath a certain age (or indeed stature) should travel in little cages in the hold along with all the cats and dogs and rare posionous snakes.
Posted by Inner Diablog at 6:43 am