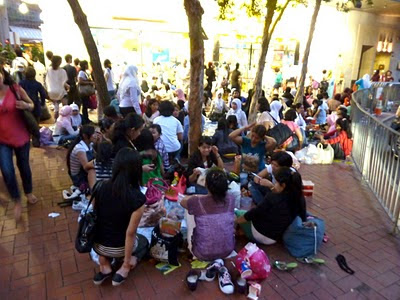 Quite the most thrillingly alien and frankly rather crazy place I have ever visited was Moscow in 1984. But in Hong Kong it has a new rival, albeit one that takes its place at the opposite end of whatever continuum of bonkers urban environments has that part of late-Soviet Russia on it.
In some ways HK is a bit like a Blade Runner version of Dubai, though as Raj pointed out to me yesterday, Dubai was always smoke and mirrors, and Hong Kong is nothing less than the real deal. It's a global megalopolis in a way that other cities like London and New York can only dream of being.
It all begins with the airport. JFK and Heathrow appear to have been purpose-built to confound and annoy...to constrain. Not so HK's vast gleaming terminal, from which the process of exiting and shifting oneself to the centre of the action is a straight line in all senses.
In North America the underclass tend to shuffle around the streets after dusk pushing supermarket trollies as if auditioning for the next big post-apocalypse blockbuster...while their more successful counterparts (Conservatives and Liberals, though the latter are more likely to have a dog) stroll by, seemingly secure in the knowledge that their comparative comfort is underpinned by the kind of hard graft no bum would ever contemplate.
Contrast Dubai and HK, where the disenfranchised are actually doing more than their fair share of the work (though this person I snapped yesterday close to Times Square in Causeway Bay had clearly decided to make a clean break with capitalist enterprise and consumerism.) 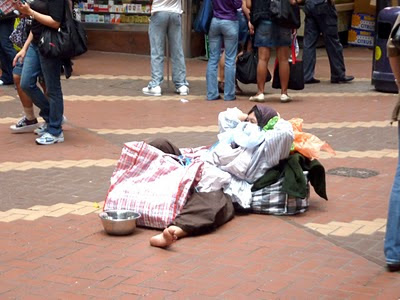 In HK the underclass is dominated by hard working women from Indonesia and the Philippines, and yesterday (Sunday) was their day off. The Indonesians tend to gather on the NE section of Hong Kong island, specifically in and around Victoria Park. As dusk approached most of the local pavements were still clogged with tight little clusters of headscarved young ladies chatting and noshing.
Humidity has risen to 94% this weekend, which makes strolling around HK rather like partaking of a lukewarm steam bath (and how many times was I gobbed on yesterday by the aircon units covering almost every high facade?). Into this already rather dense and cloying atmosphere wafted the stinky aromas of spicy Indonesian food and uncovered Indonesian foot.

On my first night here I got the MTR to Central Station and had a wander uphill into Soho and Lan Kwai Fong where I encountered scenes reminiscent of provincial English towns on Saturday night, with demonstrative public drinking and with the obvious markers of excess, such as screeching ladies of the unrefined sort wandering around with inflateable penises. I suppose I had calibrated my expectations of Asia in terms of Tokyo and Singapore and was quite taken aback by how full-on a party town this is. I guess I had forgotten that us Brits used to run this place. (They still use our plugs and drive on our side of the road...though I have to say that their understanding of the etiquette of boarding and disembarking from jet aeroplanes is positively Chapin-esque.)
The next morning I was picking my jaw up off the floor again whilst waiting to meet my old buddy Raj in The Lee Gardens mall and in the basement discovered a premium nibbler's paradise in the form of Gourmet. I was practically hyperventilating when I spotted the shelf with luxury Japanese mochi and delicate little Taiwanese green tea cakes.
Anyway, aware that a liquid lunch almost certainly beckoned (if indeed there was to be any lunch with the liquid) I tactical-snacked on a red bean and pineapple bun which did indeed turn out to be the best thing I'd eat all day.
Posted by Inner Diablog at 8:38 pm

Sounds fantastic...keep us all posted frequently!