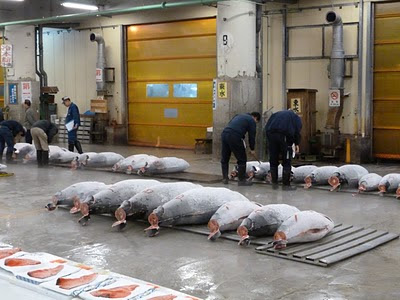 Forced myself up at 4am today to register on tim

e to be one of the 140 people permitted each morning to witness the blue-fin tuna auction at Tokyo's famed Tsukiji market.
The vast majority of those with similar propósitos were either Japanese or Spanish, those great despoilers of the sea. We were all given rather loud yellow waistcoats to wear to distinguish us as the day's licensed gawpers.
The guy standing beside me was wearing flip flops, not in truth my preferred choice for wandering around the world's largest fish market. He could have stopped at the souvenir store on the way in and kitted himself out with some nifty Kanji-covered wellies.
For the first half an hour the prospective purchasers stalked the rows of expensive fish ($100,000+ for the largest) prodding them with their sharp hooked implements and inspecting samples at a side table using torches and occasionally a judiciously applied finger.
Then at 5:30am a bell rang and the auction proper commenced.. The auctioneer appeared to enter a trance, chanted loudly and rocked back and forth on his little platform, waving his arms around as the punters around him made barely visible hand signals. It was all over fairly quickly, and almost before it was over the gates behind the auction were being lifted and the tuna prepared for their exit to the world of fine dining (and indeed their exit from the world's oceans.)
Sushi was apparently invented by a Tokyo chef during the 1820s, a time of hardship. It caught on fast. But most Japanese don't eat it as regularly as we westerners might imagine.
We were repeatedly told not to use flash, but of course there was an American in the group who was either hard of understanding or deemed himself exempt from such instructions. He didn't think much of the prohibition relating to wandering around the wholesale market before 9am and led the entire group inside almost as soon as the auction was over. I followed. I can be hard of understanding too sometimes.
Afterwards I breakfasted on tuna and scallops in one of the cramped little eateries attached to the Tsukiji market. Satoshi told me last night that the oma maguro would melt in my mouth...and it did.
Posted by Inner Diablog at 12:34 pm