No dog no snog 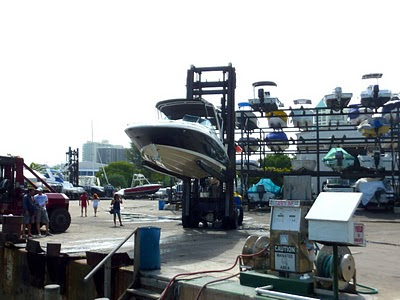 Storms are battering the south east coastline of the USA and today at least, American-suckfest-Airlines weren't flying north to La Guardia.
Normally a cancelled flight would be seriously bothersome. But with this ticket the rescheduling is automatic, and if you don't like the flight they assign you to ('6am...you are kidding right?') you just ring them up and pick another.
And there must be worse places to be stuck than South Beach. Even the people in the launderettes are gorgeous here; and the pigeons are all doves.
The obvious exception to all this loveliness was the naked man in the corridor this morning. But generally this is a city where you have to wipe the sweat off your brow and the drool off your chin.
Trouble is that most of the 11/10s are brandishing menus. Which also means that Miami is the kind of the place where one periodically experiences the bittersweet awkwardness of being quite seriously harassed by beautiful people. There's only a certain number of times you can take a direct hit from one of these hostesses' smiles before you end up feeling a bit like Pete and Dud in the famous old 'Bloody Greta Garbo' sketch.
Had a great afternoon yesterday getting the full tour of Miami and the beaches, including Key Biscayne, Coral Gables and Coconut Grove. Kroutie is in real estate and knows where Dexter's old apartment is, but it was a bit out of our way, so the pilgrimage was postponed for another occasion.
Lunch was at Scotty's Landing, a Florida institution on the water in the Grove, which features valet parking for boats (see pic). Now that's something you don't see in Beaulieux-sur-Mer.
In the morning I'd taken myself on a little tour of Little Havana, oddly familiar thanks to time spent watching V thrashing her ambulance of death around this neighbourhood in Grand Theft Auto: Vice City. Not much to see at all really, besides the old men playing dominoes. When I told the people at the Greenview that I planned a jaunt over there, they looked bemused. Still, I did manage to get a few interesting pics, and will publish these shortly as a photo essay. Not many Che Guevara t-shirts around, oddly enough.
I don't mind shallow. In fact I need a little fix of it occasionally, and Miami is just the boleto. I've cashed out of what the chain-smoking postmodernists refer to as 'the spectacle,' and Latin America's unofficial capital tends to remind me of just why it was so very important to do so...and yet leaves me with a wry smile on my face.
One bunch I didn't think I'd have to contend with this early in the trip (at least not before Thailand), are those marauding parties of northern England's tattooed lower orders. They drift through the beachside action like snorkelers over a shallow reef, obviously thrilled to be there, yet somehow separated from this colourful medium by a transparent barrier.
The menfolk act as if they're on an extended stag weekend, but this is one foraging expedition that's almost certain to end in disappointment. To score on Ocean Drive, an outrageously heady mix of glamour and skank, you need to look as if you make your living irreproachably illegally. More legitimised forms of brigandage, such as banking and lawyering don't cut it on this dapper Deco parade, but simply looking scruffy won't do either.
On the Lincoln Road open air mall on the other hand, those wanting to mingle to good effect have to accessorise themselves with a pooch. Can there be a more chucho-permissive bar culture in the world?
During the daytime on this boulevard, you have to claw your way through a miasma of recently perspired perfumes. There's plenty of mutton dressed as lamb on show, but it's mutton that can still carry off a pair of tightly-tailored lamb-sized shorts. Meanwhile, the dudes who work in the Quicksilver branch here have to be the most hilarious at any in the network.
I had an oversized lager at the local branch of the Hofbräuhaus last night. Rather worryingly the Germans at the next table mentioned Auschwitz at least three times. Miami Beach isn't quite the God's Waiting Room it was back in the 80s, but that particular place remains more than a topic of idle conversation here.
Posted by Inner Diablog at 11:32 pm

I have lived in Miami for over 10 years. Saw a guy get beaten up once in Little Havana for sporting a Che tattoo. I'm serious!