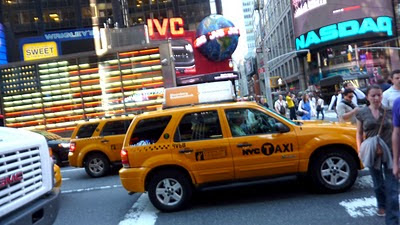 Plenty of cheap Margaritas on offer last night along the lower reaches of 8th Avenue, yet resorting to Mexican food at this stage of the trip seemed a bit of a cop out. But just give me anything without chips...
I'd been tempted to tuck into the Thai food ahead of schedule, but then I discovered this Puerto Rican eatery called La Taza de Oro close to the corner of 15th street, which has an ambience part diner, part barber shop, and a clientele which, last night at least, was decidedly gritty.
I was soon tucking into a fried fillet of tilapia with rice and beans. And guess what, they even have wi-fi. But no booze. So I very nearly ended up having my second dry evening on the trot. Anyway, their Nectar de Papaya was just what I needed after trying their home-made habanero sauce.
On returning to my little hotel the previous night around 1am, I found myself struggling to keep my balance. Unusual, at least for sober me. However, when the swaying reoccurred in the afternoon yesterday I discovered that the staircase shared a quality with the establishment's proprietor: it is not straight. (He'd given me such an intense gaydar scanning when I checked in that I felt the need to remove my shoes and place my laptop in the nearest plastic tray.)
By the time Armida had finished around midnight the audience at the Met had thinned considerably. It's one of Rossini's lesser known works and features an unusual yet highly enjoyable second act which is largely balletic. My seating location was labelled as the 'Family Circle' but rather than kids with hot dogs, I was mainly surrounded by ancient-looking couples, the usual combination being aggressive little old ladies*(every one of them some poor Jewish kid's mother) attached to husbands who wittered on like Woody Allen.
* one behind me observed at the intermission that Renée Fleming had been weak at the start but seemed 'to be getting into it now'. I felt like turning round and saying 'Lady, you try singing it...'
Posted by Inner Diablog at 2:07 am