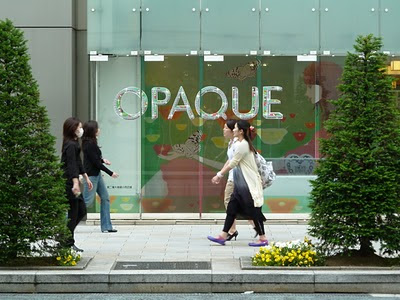 Raj warned me before I left Hong Kong: Tokyo is opaque, even to the Japanese. He used to be the Asia Pacific practice head at my former firm and knows his way around Asia's big towns.
After a week here in Japan I can see what he was getting at. Certainly in the first few days there were plenty of those moments when the clues suddenly dried up and I found myself standing inert within the mobile multitude, wondering how to proceed. I know some Japanese, that helps, but not enough really.
Whatever the frustrations I haven't yet been able to hold them against the Japanese themselves...cyclists on the pavement notwithstanding. Back in Hong Kong on the other hand I ended up directing my own inner John Woo movie in which the locals, salesmen on Nathan Road in particular, were all dancing a samba in the hail of bullets as doves floated imponderably in the foreground.
I was relieved when I first took the subway with Satoshi and he immediately chose a line that didn't actually connect with the one we needed to connect with, and anyway chose the train going in the wrong direction. He's lived in Tokyo ten years and still finds it a bit of a struggle at times.
Don't ask a local for directions seems to be the general rule. The other day I needed to get to a western suburb called Ogikubo and had already planned out a route on public transport. When I asked the hotel manager for some assistance with locating an address, he proceeded to outline to me his preferred trajectory across the public-private morass that is the Tokyo railway system, and it turned out that his alternative route required at least three more changes than mine.
"Just look at our airport, and the MTR system," said Raj of his home town by way of comparison with Tokyo. No expense spared, all simple straight-line pathways. HK airport certainly is impressive. I spotted large groups of people moving around its vast inner spaces in trail of guides holding up a coloured sign.
At times Hong Kong felt a bit like one enormous tumescent airport, or at least its departure lounge, with all those luxury-brand stores wherever you turn. The people are friendly, but often I imagined I had detected a wry smile embedded in this amiability.
Raj suggested that we meet on day two outside Louis Vuitton, in the kind of wholly non-ironic manner I could never have got away with back in London without sending out tosspot signals.
And when I got there I had a little wander around the streets surrounding Lee Gardens just to make sure I'd got the right Louis Vuitton store. In London the big luxury brands are confined to little enclaves like Bond Street, and Sloane Street, but in HK they're kind of everywhere, like Starbucks in Vancouver*.
Easy to get around it certainly was, but I found HK a bit oppressive, though perhaps the 94% humidity had a lot to do with that. It's no place for dog lovers either. I'd been there almost two whole days before I spotted a pooch on a lead, and that one was being yanked along by an ex-pat. This felt odd after Lincoln Road in Miami and Chelsea in NYC. Here in Japan you do see quite a few dogs, of the Hachiko variety in particular.
Japan was at its most opaque to me this morning, when I got a little lost in the fog up by the Kegon Falls searching for monkeys. In fact I ended up searching for the falls themselves, an ever present roar, but completely shrouded in the murk.
The concept of free wi-fi Internet would appear to be anathema to the Japanese, which is one reason I've been blogging so infrequently since I arrived here a week ago. In Kyoto I found one place which offered a free drink with paid-for Internet access. If you only stay for 30 minutes it could just as easily have been free Internet with a paid-for coffee, but here in Japan time is all important, and often it's what you pay for here. On Sunday Satoshi pointed out a new chain of barber shops that are popping up all over Tokyo which offer a 'haircut in 5 minutes'. In fact, he said, the haircut usually takes less time, so they use up the remaining seconds by vacuuming your head, "which makes you feel like rubbish".
*180 outlets in the downtown area alone, I was informed.
Posted by Inner Diablog at 1:13 am