I've been LOLing away this week at some of the output on Twitter from the nitwits acting like they've just woken up in some terrifying, feudal dystopia.

One British economist in particular only now seems to have shaken off the mind-fog and achieved awareness that he's spent the past six decades living in a constitutional monarchy with 1200 years of history behind it.

In particular he has been getting his knickers in a twist about the term "Liege Lord", which cropped up amongst other medieval flourishes at St James's Palace the other morning.

There are several points worth making here.

If ever you have the misfortune to face the Coldstream Guards in battle they will not be wearing red coats and bearskin hats. Similarly the artillery that we have been sending to Ukraine was not carried there by horses mounted by men who looked ready to give Boney some hell. Most of us can cope with the distinction between actual and ceremonial. 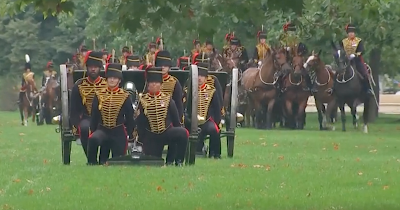 The useful continuity in our mode of government comes without uniform smoothness, reflecting the stream of national events that fashioned it. Call the UK system a Frankenstein's Monster if you must; it certainly appears to possess core parts and appendages that have come from different holes in the historical ground.

Following the death of Elizabeth II, we have had fairly unusual opportunity to see "under the skin" of the state, and any weirdness thus manifested should not necessarily be terrifying. In as much as the late monarch was surely never a flesh-eating lizard in a skinsuit, neither is our system of government, nor semi-independent offshoots like the Corporation of London.

For the protocols and ceremonials of our organic constitution necessarily possess parts that are visibly old as well as more newish, but that has never inferred that the entire system is incapable of modernity.

Indeed, if there is one thing we are seeing in the contemporary world, it is how more apparently modern written constitutions can struggle to adapt to changing circumstances.

And though the Privy Council is a more direct descendant of the Anglo-Saxon Witan than our new King himself is from Alfred the Great, that should not mean, as one commentator has suggested, that there ought to have been a free and open discussion on Charles's fitness to be King in St James's Palace on Saturday. The Proclamation was a formal expression, rather like the language that was used, of something more straightforward. An underlying smoothness beneath the symbolic lumpiness, if you like.

If this were not the case, the contrasting iconography on display outside The Royal Exchange a couple of hours later would have had the potential to be awkwardly discordant. Yet once again, I remain safe in the knowledge that the Lord Mayor doesn't show up to work in that outfit every day, accompanied by Oliver's army. 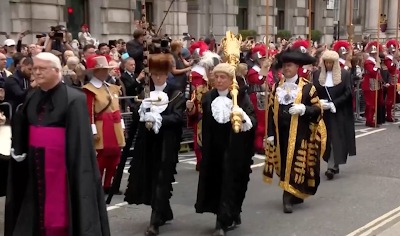 So let us be done with the pageant paranoia. We are not living in Victoriaworld infiltrated by deferential droids impossible to distinguish from actual human beings.

Perhaps the real problem here is modernity not antiquity. It has encouraged us to become anxious about any disconnect between appearance and reality and that in turn is leading us to be dismissive and occasionally shaken by history itself — for like the very best written stories, it shows rather than tells, forcing us into the grown up world of interpretation.

Posted by Inner Diablog at 4:05 pm