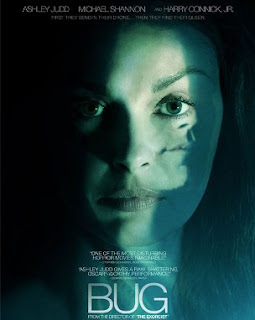 This bizarre blend of the sensibilities of Tennessee Williams and Philip K. Dick is a reminder of how different the arts of writing for theatre and screen can be. Playwrights tend to make dramatic use of the natural discontinuities afforded by the passage of discreet acts. Situations and chronologies are knowingly shifted and audiences left to bridge these little chasms with their own imagination.

Cinematic storytelling on the other hand is inherently more gap-less, which is perhaps why the transition in Bug from "I'm not an axe-murderer" to full-on whackodom is less than convincing. Michael Shannon, who played Peter for years on Broadway and elsewhere is excellent, especially during the incrementally tense and intriguing first forty minutes, but Ashley Judd's over-acting gradually becomes almost as painful to watch as the scene where Peter yanks out one of his teeth in search of CIA implanted insect egg sacks.

Would have been more enjoyable I suspect if the dark comedic elements had been more to the forefront.
Posted by Inner Diablog at 8:00 pm