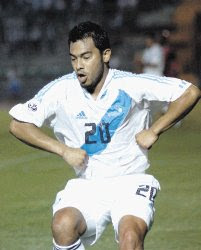 I'm watching the match in Personajes today. I suspect all those people in orange t-shirts in the Cafe 2000 next door are feeling a bit sick right now. There are some very noisy Russians in here though.

Sometimes I think it would be worth learning Spanish just in order to follow the local soccer commentary.

There would appear to be far more nouns in Latin American football discourse than our own. Wherever we might say that someone is doing something the commentator over here is more likely to observe that a something is being done, be it a barrida or a bonbón or one of countless other specialist terms that I have gradually assimilated through several major international tournaments.

Channel 11 has a pair of pundits that I find a bit trying though: a Chapin and an Argie. They remind me a bit of the classic BBC F1 partnership of Murray Walker and James Hunt, the one seemingly high on banned substances and the other detached and phlegmatic to the point of not even noting that a "goooooooooooooool" has been scored until he has finished whatever it is he has been prattling on about. When these two are holding the mikes you need to keep your eyes glued to the TV as there's nothing in the tone of voice of either man which would allow you to distinguish between a situation likely to lead to a goal and one which couldn't possibly.

Guatemala's World Cup qualifier with St Lucia last Saturday provided a welcome break from the beautiful game as exemplified (in the main) by the Euro2008 competition.

The St Lucians were a truly hapless bunch. Just a few minutes into the match V joked that they must have overdone the pre-match frijoles. Soon their lethargy progressed to the acute phase, with several keeling over with agonising cramps before the first half was even over. Their defending was straight out of Alan Hansen's worst pesadillas and their strikers, on the rare occasions they made it into Guatemala's half of the pitch, didn't seem to know where the goal was.

The Chapin commentator, typically rather animated during Euro2008 matches, sounded here as if he was about to have a stroke any moment. Rrrrrrrrremate!

The man in the pic above, Guatemala's famed No9, Carlos 'El Pescado' ('the fish') Ruiz - David Beckham's team-mate at LA Galaxy - scored four of the six goals conceded that night by the Caribbean outfit. (During the last set of World Cup qualifiers Ruiz had acquired the unfortunate extra nickname of Nemo, because of the way he appeared to have gone missing!)

When the St Lucian keeper Dany Michael went down with cramp in the second half it was the Guatemalan strikers that rushed to his aid before a rather fat-looking physio from the other side eventually arrived on the scene. Michael's replacement had, according to V, "piernitas de grillo" (spindly legs) but the more immediate target of the commentators' deprecatory wit was the way he had come on bearing his squad number (No3) scribbled on a piece of card which had been fastened it to his jersey with masking tape!

The return leg is tonight in Los Angeles. Not exactly a home tie then for the sorry St Lucians! Another chamarreada?

Update: Looks like I'll have to order another Gallo. The Tulipanes have equalised.

Posted by Inner Diablog at 8:16 pm